Vienna / Amsterdam – The International Hans Gabor Belvedere Singing Competition, held for the last 31 years in Vienna, Austria, is spreading its wings and beginning in 2013 will take place in the most renowned opera houses in the world on an alternating basis.  In June 2013 the city of Amsterdam will host the first event to take place outside of Austria since its founding in 1981. Plans for 2014 and subsequent years will take the competition to Germany, England, and across the Atlantic. 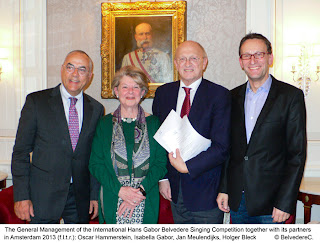 Competition managers Isabella Gabor and Holger Bleck are thrilled about the new perspectives:  ''The City of Amsterdam is generously providing support to the Belvedere Competition, and is assisting in forming a foundation for the purpose of ensuring that this enormously important and prestigious singing competition which changes the lives of so many young singers will continue to exist.  This is a fantastic outlook, and we are extremely grateful."

The 2013 preliminary rounds will be held in more than 50 cities world-wide. These venues will be announced on the website  www.belvedere-competition.com in January 2013. The finals will take place in cooperation with the Nederlandse Opera Amsterdam on 6 July 2013 in the Het Muziektheater Amsterdam. The singers will continue to be judged by a jury conisisting of artistic and casting directors from the world's most prestigious opera houses including the Royal Opera House Covent Garden London, Barcelona Liceu, Deutsche Oper Berlin, New York Metropolitan Opera, Washington National Opera, to name a few.

The International Hans Gabor Belvedere Singing Competition is THE "springboard" for a career in opera: Past participants and prizewinners include Angelika Kirchschlager, Angela Gheorghiu, Ildikó Raimondi, Elisabeth Matos and Elina Garanča. Recent winners include Italian tenor Antonio Poli, who made his debut in 2011 at the Salzburg Festival in Tchaikovsky's Iolanta alongside Anna Netrebko and Piotr Beczala. Soprano Rachel Willis-Sörensen, the 1st Prize winner of the International Hans Gabor Belvedere Singing Competition in 2011, made her highly-acclaimed Royal Opera House Covent Garden debut in February 2012 as the Contessa in W.A. Mozart's Le nozze di Figaro.

The competition administration and headquarters will remain in Vienna.